Unseen in 70 Years – Its Whereabouts Lost to History –

One of the Most Important Roman Sculptures in Private Hands

Named after one of the great lost houses of Scotland

Where it once resided for 150 years

Is Estimated at £2-3 million

Public Exhibition at Sotheby’s London from 3 to 7 December

LONDON, 23 NOVEMBER 2021 – Seventy years after it was last seen in a New York auction in 1949, ‘The Hamilton Aphrodite’ – one of the greatest Roman sculptures in private hands, that had been thought lost to history – has reappeared at Sotheby’s. Dating back to the 1st or 2nd century AD, the Roman Imperial marble figure of the ‘Capitoline Aphrodite’ will be presented in its own dedicated sale on 7 December 2021, with an estimate of £2,000,000-3,000,000.

Florent Heintz, head of Sotheby’s Ancient Sculpture and Works of Art department, said: “The Duke of Hamilton is said to have fallen in love with Aphrodite the moment he first saw her, almost 250 years ago. I also fell under her spell the moment I laid my eyes on her, struck as I was by her subtle blend of earthly beauty and divine majesty, and I hope that the public will share the same experience.”

Hamilton Palace: The marble also lays claim to being the finest single piece of ancient sculpture ever to have resided in Scotland, where it spent 144 years between 1776 and 1919, as one of the main attractions of Hamilton Palace, the seat of the Dukes of Hamilton, one of the most famous lost buildings of Scotland and one of the grandest houses in Britain at the time. The Aphrodite entered the collection of Hamilton Palace in 1776, when it was purchased in Rome by Douglas Hamilton, 8th Duke of Hamilton and 5th Duke of Brandon (1756–1799) from the Scottish neoclassical painter and art dealer, Gavin Hamilton (1723–1798, of no relation to the Duke).

A portrait of Douglas Hamilton by Gavin Hamilton painted around the same time (circa 1775-1777) is held in the collection of the National Museums Scotland. The painting celebrates the Duke’s Grand Tour to Rome, with the classical ruins of the Forum, the Colosseum, and the Alban hills depicted in the background.

This statue is recorded as standing in Hamilton Palace’s “Great Staircase” in the 1850s and 1870s, and is one of four ancient marbles that adorned the halls of the house. Of the other three, one is in a US museum, one was last sold at auction in the 1970s in New York, and the whereabouts of the last one remains unknown.

“The large Venus I had in my possession is now on its way to Scotland. The Duke of Hamilton fell in love with it the moment he saw it, and secured it immediately.” 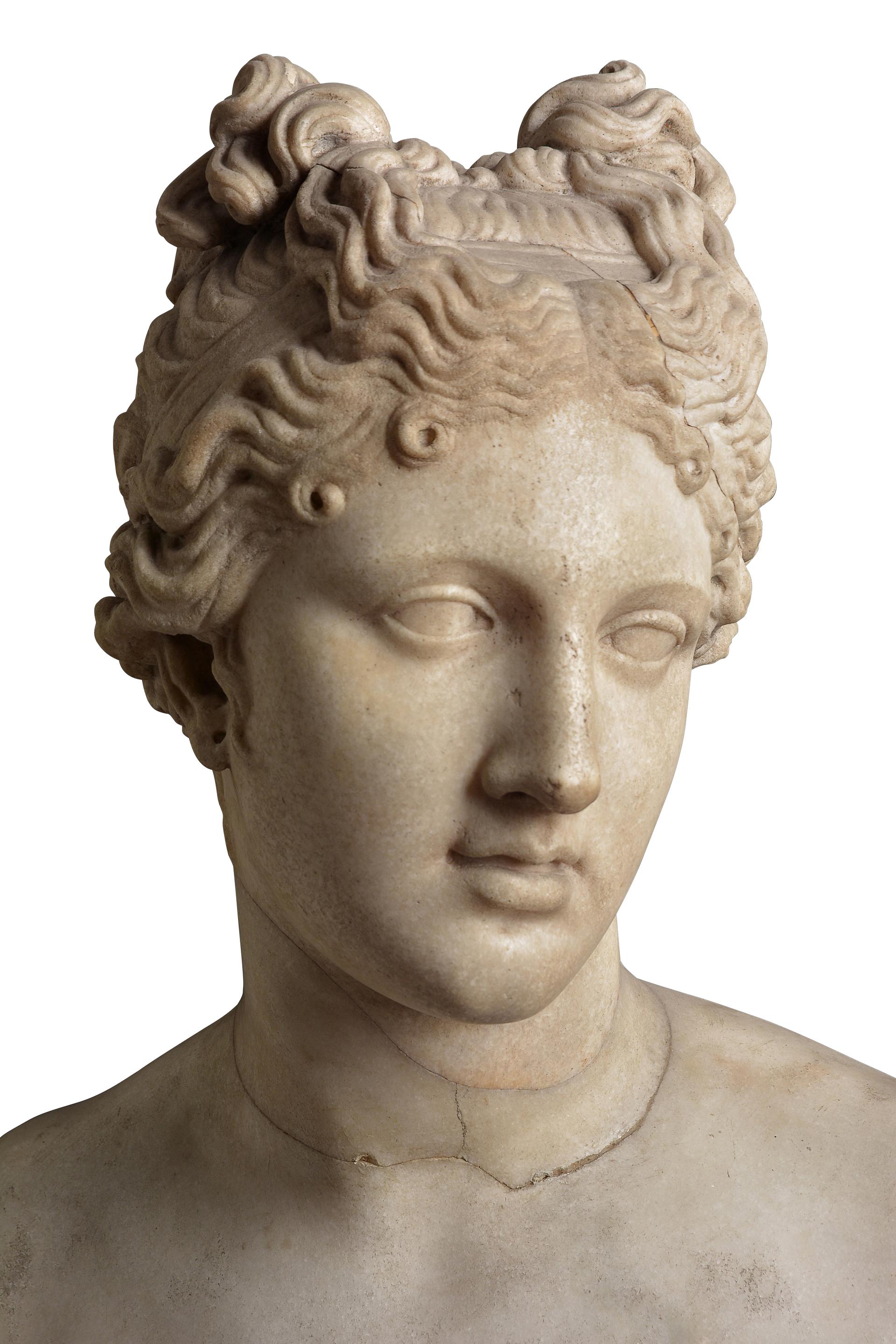 Aphrodite: The figure of Aphrodite in art history has captivated artists for millennia, and those carved by sculptors in Ancient Greece and Rome represent the pinnacle of the classical ideal. However, she remained elusive for the enthusiastic British collectors who toured Italy in the 18th century. Only two other equally significant statues of the goddess were ever brought to Britain: the Barberini Venus (sold at auction in London as the ‘Jenkins Venus’ in 2002) and the ‘Townley Venus’, now in the British Museum.

Literally larger than life, ‘The Hamilton Aphrodite’ stands at 187 cm. tall from the top of her base, and is the only full statue of the deity depicted in the nude to come to auction in 20 years. A true triumph of Roman craftsmanship, this sculpture is an apt tribute to Aphrodite herself, the ancient Goddess of Love and embodiment of feminine beauty.

The sculpture was inspired by a lost 4th-century B.C. Greek statue of the Aphrodite of Knidos by Praxiteles, and depicts the goddess standing with the weight on her left leg, her head turned to her left, her wavy hair parted in the centre and tied in a top-knot, and her ears pierced for earrings.

1920: William Randolph Hearst (1863–1951), International Studio Art Corporation, (at the Bronx Warehouse in 1933), acquired from the above on June 15th, 1920. Hearst was regarded as the greatest newspaper baron in the history of the United States, and his influence extended to publishing, politics, Hollywood, the art world and everyday American life. Amassing a vast and impressive art collection for Hearst Castle, his San Simeon estate, Hearst is the magnate whom Citizen Kane (1941), Orson Welles’ directorial masterpiece, widely regarded as the greatest film ever made, is primarily based on.